"Special Olympics and the Burden of Happiness" ... 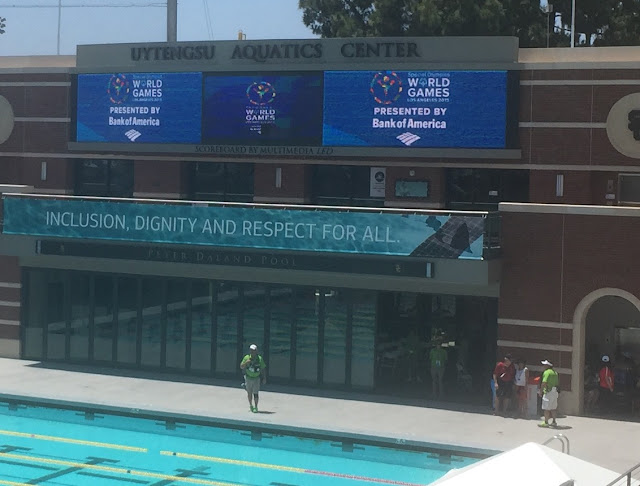 We have been spending a great deal of time at this years Special Olympic Games here in Los Angeles.  Now, not so much time that it would account for my nearly 8 month hiatus but yep, we have passed a whole lotta beautiful time there, Zoey and I, since the games began last Sunday. Its been a joy to be among our people as I often say and quite frankly, I might go through a bit of a withdrawal as the games come to a close tomorrow.  But what I will most definitely take with me, besides some incredible experiences and memories, is the desire to do more to see inclusion, dignity and respect for all be common place in this world.  Tall order?  For sure. But so much more can and has to, be done. This is a very well written and thoughtful piece from the NY. Times today and worth a read.

And, as an added bonus to this out of the blue post, a few pictures  A repeat for people who follow me on Facebook and Instagram but, for anyone who, on the off chance might still have my blogger in their reader, a bit of the magic that have us wanting to stay put in that bubble that surrounded us during these World Games. 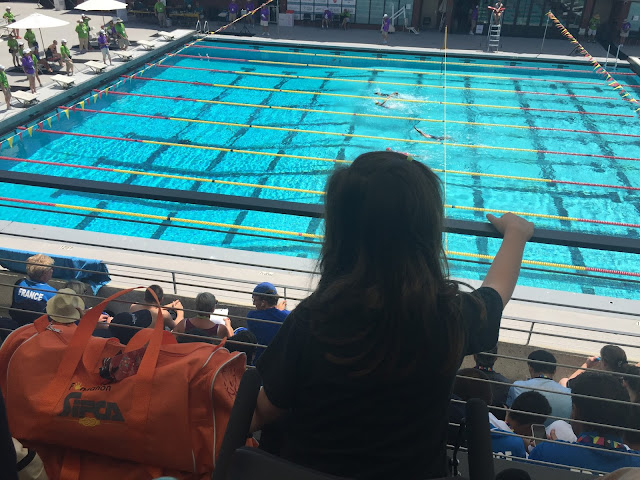 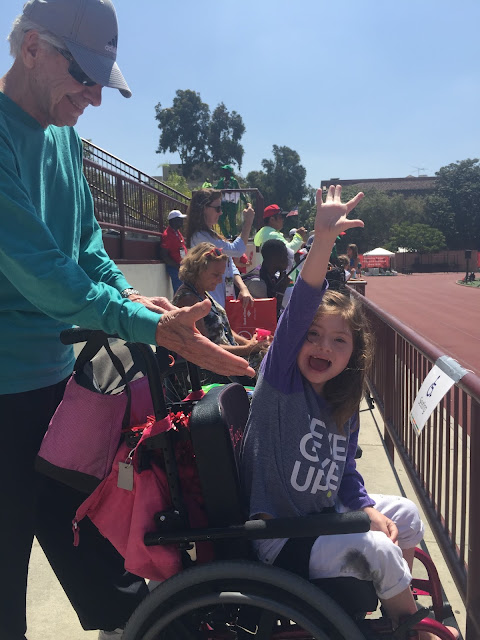 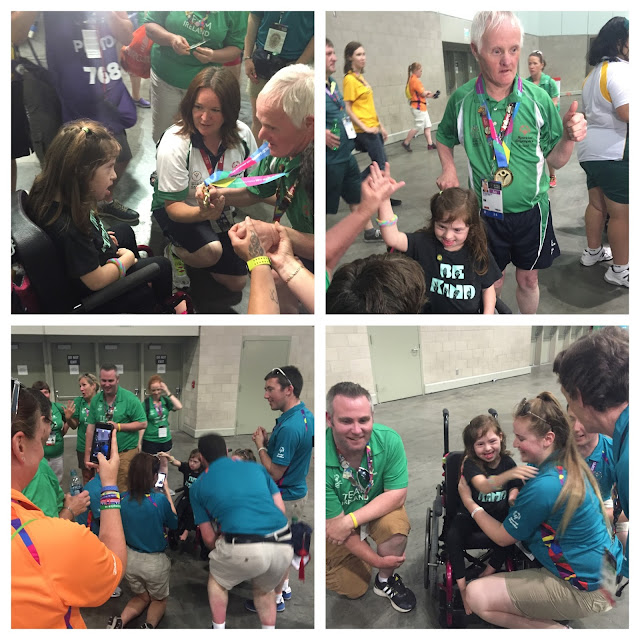 One of our most cherished memories will be  of meeting Peter.  An athlete and gold medal winner in  Bocce ball from Ireland.  The whole contingency from Ireland that was there at the awards ceremony were so enamored with Zoey.  They spent at least 15 minutes with her soaking up her magic. 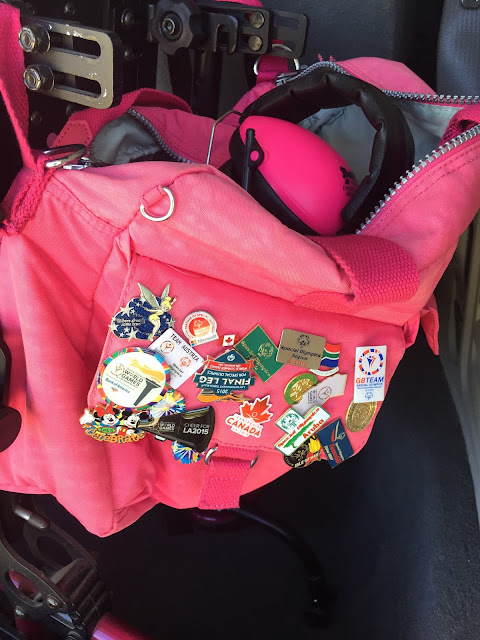 Wherever we went, Zoey waved to every single person she passed.  She would frantically wave that little arm said hi and as of late has even stepped up her game and says "Hola" nearly as much as she said "Hi"  Totally cracks us up. And in return people just showered her love, not to mention with pins from all over the world. And today, an athlete from El Salvador, came up to her, kissed her on the top of her head, took his medal from around his neck and put it around hers.  It was so touching. So much more to share but I think I will leave it at that.  Best let the shock of my resurfacing sink in.  I have no idea what compelled me to write but I did and we'll see where it leads.

Hopefully not to another 8 month shut down.  Or maybe.  Hard to say.
Posted by Heather at 12:01 AM

Glad to see you blogging again! Zoey looks great. I see from the new cover you have some new additions. Please do keep us up-to-date on the goings-on in your family - I do miss hearing about them!

So sweet! Glad you had such a great week with your girl!

How exciting to see Little Wonders show up on my feed this morning. Good to see you here. I see you on FB but I like blogging better. It feels more personal somehow.

I have loved seeing your posts at the games and wish that I had made it to something. I felt overwhelmed, to tell you the truth, and not a little guilty not wanted to take Sophie. Thank you for posting about them and for all the remarkable and beautiful pictures of Zoey. I can imagine HER being at one of the games in the future and, if not, certainly an ambassador of joy!

Hey it's me Ken, but my Google ID is being a bitch, hopefully this lets me post. Welcome back...I hope it is for a stretch, and if not, it isn't. Those are great pics and better stories, wish I could see something like that happen around this place. I'll have to try and tell you about Bennett's first time with a Sporting Event. I can't recall if it was special Olympics or not. Reminded me of what you said happened with Zoey. Sensory overload.

Anyway...sometimes I imagine you and others like you talking to your kids the way I talk to Bennett. He seems to like it this way. Like he is just like everybody else. I think...and I'm no genius but I think, that's how it is supposed to be.

It was so good to see you back! It looks like everyone had a great time. What wonderful news!

Be it rising or resurfacing, I'm grateful you've graced us with your words here and shared your family & heart with us.
Stick around, please? xoxo

Could it be you?

Do it for Zoey and all of her fellow warrior friends.

Never Give Up. Help put an end to SMA. Get involved today 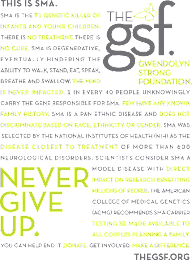 "Strange is our situation here upon earth. Each of us comes for a short visit, not knowing why, yet sometimes seeming to a divine purpose. From the standpoint of daily life, however, there is one thing we know: That we are here for the sake of others ... for the countless unknown souls with whose fate we are connected by a bond of sympathy. Many times a day, I realize how much my outer and inner life is built upon the labors of people, both living and dead, and how earnestly I must exert myself in order to give in return as much as I have received." ~Albert Einstein
"People are often unreasonable, illogical, and self-centered; Forgive them anyway. If you are kind, People may accuse you of selfish, ulterior motives; Be kind anyway. If you are successful, you will win some false friends and some true enemies; Succeed anyway. If you are honest and frank, People may cheat you; Be honest and frank anyway. What you spend years building, someone could destroy overnight; Build anyway. If you find serenity and happiness, They may be jealous; Be happy anyway. The good you do today, people will often forget tomorrow; Do good anyway. Give the world the best you have, and it may never be enough; Give the world the best you've got anyway. You see, in the final analysis, it is between you and God; It was never between you and them anyway."
Mother Teresa~

Watch.Share.Educate.Changing the world, one extra chromosome at a time.
"Some luck lies in not getting
what you thought you wanted
but getting what you have,
which once you have got it
you may be smart enough to see
it is what you would have wanted
had you known....
~ Garrison Keillor 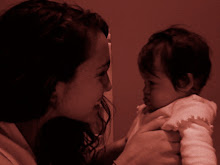 Click on the picture to read Cailtin's amazing tribute to her sister
"Faith is being sure of what we hope for and certain of what we do not see."~Hebrews 11:1

Click on the button's below. Is one beautiful face calling you, speaking to your heart? 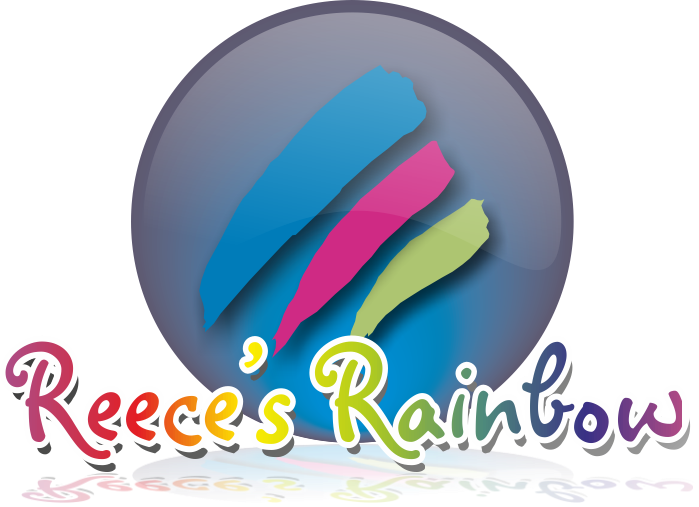